Remember a couple posts ago when I posted a link to the site My Fellow American? Well, through this exceptional site, I discovered Jordan Denari's beautiful story. A couple things attracted me to her story. First off, she's a student at Georgetown University, which is near where I'm from!! Second, she's a Catholic American. I love reading Islamic related stories from a non-Muslim perspective because to me, they're very rare and I think they really capture the beauty of Islam. Lastly, her story was so simple, yet touching. As stated in her blog, 62% of Americans have never met a Muslim. To some people, it may be shocking, but I've been around people that truly have never met a Muslim. If you've read my story under the Who I Am page, you would know that I did not come into college a fully practicing Muslim. Most people did not know I was a Muslim because I did not wear the hijab nor carry the identity of a Muslimah. The fact that people didn't know I was a Muslim placed me in many awkward predicaments. There were moments where my American "friends" would be putting down Islam and Muslims that they had recently just met, not knowing that I too was a Muslim. Many of them had never met a Muslim in their life and the fact that they were now being exposed to them in college left them confused. Where they come from, Muslims aren't ordinary Americans like them. To them, Muslims are nothing more than terrorists that they see on CNN and Fox News. I was inspired by Jordan's story because she got to know a Muslim for who she truly was. I really admire her for also going out and educating herself about Islam. I really hope that one day, through education, the world will get to know Islam for more than what is portrayed on television.

My Best Friend is Muslim 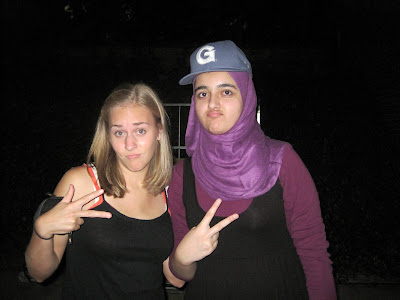 When Wardah and I met during our freshman year of college, our first impressions of one another were quite interesting. We’d gathered in a dorm common room with some mutual friends to watch The Notebook on Friday, October 9th, 2010. Wardah was sitting on the couch, with a pink GAP hoodie pulled over her head. She seemed quiet, and offered the other girls and I some peanuts. She then handed me a canister labeled “Honey Roasted Almonds” that had pistachios inside, and I thought to myself, “Who is this girl?”
Wardah probably thought the same thing about me. I came in wearing a low-backed dress, planning on going to a party I didn’t really want to attend. Not knowing that I was trying to avoid the party, Wardah assumed I was a typical Jane Hoya party girl. 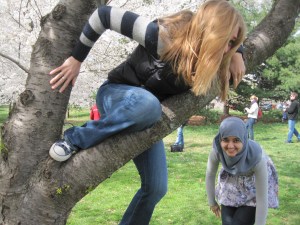 Despite the weird first impressions, Wardah is probably the fastest friend I’ve ever made. Throughout the rest of freshman year, we spent countless late nights watching “Happy Tree Friends,” trying to do the splits, skipping through our favorite movies to watch the romantic scenes, and grossing out over the fact that some women eat their placenta after giving birth.
But we also spent hours talking about deeper things, like God, family, dating, marriage, and motherhood. We could easily switch from the most silly of topics to the most serious ones, and that is what I valued (and continue to value) most about our friendship
I think a lot of my friends and family from back home think I’m friends with Wardah simply because she’s Muslim. Knowing I came to Georgetown to study Islam and religion, they might assume that I’m just her friend so I can “study” her. But when I first met Wardah, when she had the pink hoodie pulled over her head, I had no idea she was a hijabi Muslim girl.
True, I have learned a lot about Islam from Wardah—more than I ever will in all of my time spent in the classroom. Had I not met Wardah, my understanding of the hijab, of Muslim prayer, and of the importance of family and community in Islam would be utterly skewed.
I have Wardah to thank (or hate?) for my addiction to “Glee” and my obsessive crush on the main hottie, Finn. But I also have to thank her for substantively shaping my life here at Georgetown. It’s because of her encouragement that I became a Muslim Students Association board member and it’s because of her questions and commitment to Islam that I came to re-embrace my Catholic faith. Because of her honesty and openness in our theological discussions, I’m working to create sustainable inter-religious dialogue on campus.
Currently, Wardah and I are roommates in the Muslim Interest Living Community at Georgetown. Living with your best friend is hard, and our friendship hasn’t always been easy. But I continue to think back to a note she wrote me for my nineteenth birthday, just a week after we met last year:
“Hello there! I can remember back to the day we first met all those…days ago. J Haha we aren’t soulmates yet, but it’s been great getting to know you and hopefully we’ll see each other in the many years to come.”
After a year and a half of laughs, deep conversations, and way too much time spent watching babies laughing on Youtube, I think Wardah and I are pretty close to “soulmate” status. And I know, without a doubt, that we’ll be friends for years to come.
(What happens when Wardah takes over my computer: My Best Friend is Muslim AND SHE IS SO AWESOME AND I WISH I COULD BE JUST LIKE HER BECAUSE SHE IS ABSOLUTELY AWESOME AND IS THE AWESOMEST THING INTHE WHOLE ENTIRE WORLD!!!) 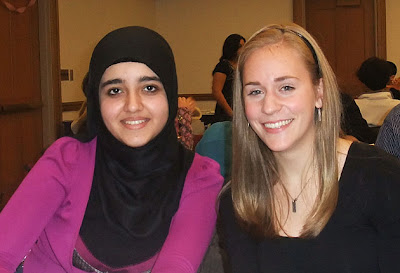