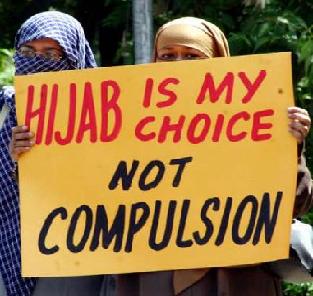 (WASHINGTON, D.C., 6/22/11) – CAIR is calling on American Muslims and other people of conscience to contact Air France and ask the airline to apologize to a Muslim worker at Washington Dulles International Airport who was allegedly sent home because she refused to remove her Islamic head scarf, or hijab.
[NOTE: On Thursday, June 23, CAIR and the University of California, Berkeley’s Center for Race and Gender will hold a news conference on Capitol Hill to release “Same Hate, New Target,” the first-of-its-kind report outlining the disturbing growth of Islamophobia in the United States during 2009-2010. SEE: http://tinyurl.com/samehatenewtarget ]
The Muslim employee reported to CAIR that when she went to work as an Air France Passenger Service Agent at the airport earlier this month she was told she could not wear her scarf because of an alleged Air France dress code. The worker refused to violate her religious beliefs and practices by removing her hijab and was promptly sent home.
In a letter to Patrick Roux, vice president and general manager for Air France, U.S. Operations, CAIR Staff Attorney Gadeir Abbas wrote in part:
“It is clear that a discriminatory dress code implemented in France would not supersede American laws protecting the religious rights of employees. Air France must follow American law and grant reasonable religious accommodations for its employees.”
Abbas said CAIR is seeking a formal apology from Air France, clarification of the airline’s policy on religious accommodation for employees, workplace sensitivity and diversity training for Air France staff at Washington Dulles International Airport, and compensation for the financial loss and emotional distress suffered by the worker.
He said this case is symptomatic of the overall rise in anti-Muslim sentiment in American society.
Video: U.S. Muslims Challenging Anti-Sharia Bills (CAIR)
http://www.youtube.com/watch?v=znk79bby1ho
Report: Decade After 9/11, Anti-Muslim Hatred on the Rise (Southern Poverty Law Center)
http://tinyurl.com/3qsv2v8
The Anti-Muslim Inner Circle (Southern Poverty Law Center)
http://tinyurl.com/6xl4d4h
Title VII of the Civil Rights Act of 1964 prohibits employers from discriminating against individuals because of their religion in hiring, firing and other terms of employment. The act also requires employers to reasonably accommodate the religious practices of the employee, unless doing so would create an "undue hardship" for the employer.
CAIR offers a booklet, called "An Employer's Guide to Islamic Religious Practices," to promote better understanding of Islam and Muslims in the workplace.
SEE: An Employer's Guide to Islamic Religious Practices
http://www.cair.com/Portals/0/pdf/employment_guide.pdf
CAIR is America's largest Muslim civil liberties and advocacy organization. Its mission is to enhance the understanding of Islam, encourage dialogue, protect civil liberties, empower American Muslims, and build coalitions that promote justice and mutual understanding.
IMMEDIATE ACTION REQUESTED: (As always, be POLITE.)
1. Contact Air France to ask the airline to apologize, clarify its policy on religious accommodation for employees, offer workplace sensitivity and diversity training for Air France staff at Washington Dulles International Airport, and compensate the Muslim worker for the financial loss and emotional distress she suffered.
CONTACT:
Mr. Patrick Roux
Vice President and General Manager
Air France, U.S. Operations
125 W. 55th St., 2nd Floor
New York, NY 10019
Fax: 212-830-4141
E-Mail: grkozlowski@airfrance.fr
Copy to: info@cair.com
Online complaints may be filed at:
https://www.af-klm.com/passage/ecomplaints/index.html
2. DONATE to CAIR so that we may continue this important work. GO TO:https://www.cair.com/support/
Posted by Riham at 7:06 PM