I Don't Mind Living in a Western World as Long as I Can be a Muslim in It. 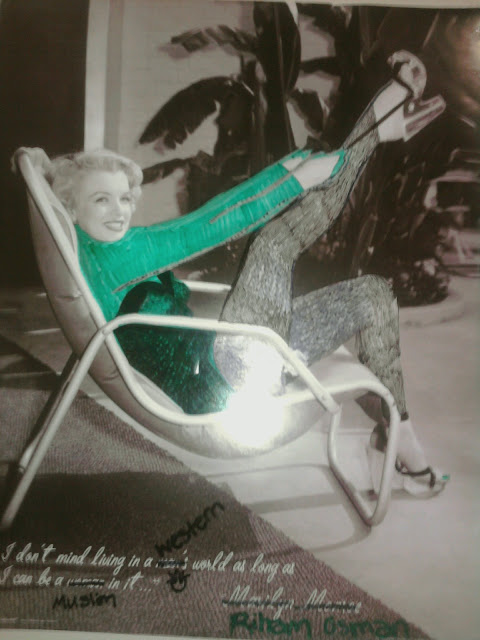 My freshman year of college, I had this Marilyn Monroe poster up in my dorm. It read [I don't mind living in a man's world, as long as I can be a woman in it]. In a way, I considered Marilyn Monroe to be one of my role models. Now looking back, I don't know why I did look up to her. Maybe because society told me to? Marilyn Monroe had the reputation of being an iconic sex symbol and til this day, young girls still idolize her. She defined being an independent woman as dressing how you please and being with many men at a time. One of her quotes reads --"The body is meant to be seen, not all covered up." Now imagine this mentality being drilled into the minds of little girls everywhere. I never believed that a woman should show her body, but I also didn't believe that it should be covered completely. What shifted my mentality?--Islam. As the year progressed, my idea of a woman's place in this world dramatically shifted. Allah created men and women equally but differently; He gave to each their own roles. Modesty [hayaa]--both inward and outward are a part of a woman's role in Islam. Islam protects women from intimidation and molestation by requiring them to wear the hijab and to avoid free intermingling with men. Islam demands equality for women in humanity, religious obligations, rewards and punishments, preservation of nobility and honor, financial dealings and property ownership, and education. Allah, The Exalted and Almighty, states in the Glorious Quran: (Oh mankind! Be dutiful to your Lord, Who created you from a single person (Adam), and from him (Adam) He created his wife (Eve), and from them both He created many men and women...) [An-Nisa:1] Before Islam, women were treated as slaves or property. They had no choice in who they married. They were forbidden to remarry if their husband divorced them. They received no inheritance from their husband or parents. Arabs believed one must have martial abilities such as the ability to ride a horse, fight, etc. to inherit. Female infanticide was occurring. Sons were preferred over daughters and daughters were typically buried alive. (When the news of (the birth of) a female is brought to any of them, his face becomes dark, and he is filled with inward grief! He hides himself from the people because of the evil (and shame) of that which he has been informed. Shall he keep her with dishonor, or bury her in the dirt? Certainly, evil is their decision...) [Sourat al-nahl (The Bees): 59] Also certain foods were forbidden to women. And they say: What is in the bellies of such cattle (whether milk or fetus) is for the male alone, and forbidden from our females, however, if it was born dead, then all have shares therein...) [Sourat al-Anaam (The Cattle: 139] People today believe that Islam removes rights from women, when in fact Islam is the light that brought rights to women when they had none. SubhanAllah, what a crazy duniya we all live in. One day, my friend and I decided it was time to draw pants and a long sleeve shirt on Marilyn and the quote changed as did my life long mentality.
I don't mind living in a man's  western world as long as I can be a woman Muslim in it.
Posted by Riham at 9:18 PM