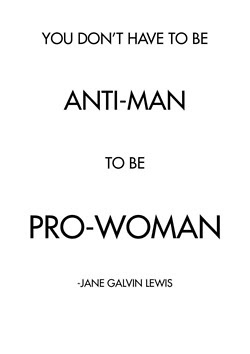 I recently came back from the UN Commission on the Status of Women, a conference essentially on feminism and women's issues. Besides attending that conference, I have read a lot about feminism and heard feminist arguments, and I realized that I don't agree with a lot of it. Many feminists will come off as anti-man. They will argue for equality and they will fight for the exact same rights given to man. I personally don't believe that to be women, we need to have the exact same rights as men. The Feminist in me tells me to embrace my inner woman-hood and to demand the God given rights I deserve as a woman. The Feminist in me does not tell me to demand to be like a man, but more like a feminine, beautiful, strong, and intellectual woman. I think as women, we fail to appreciate the beauty of our woman-hood. We don’t appreciate our emotional and sensitive qualities that God placed in us. We don’t appreciate mother-hood, a blessing only women were given. The Prophet pbuh said, “Heaven lies under the feet of the mother.” This is a blessing that wasn’t given to any man and it’s a blessing I believe every woman needs to embrace and appreciate. There is an entire chapter in the Quran titled, An-Nisa (The Women), and there is no chapter titled "The Men."

Just because Allah gave men the responsibility of being the protectors of women, to lead prayers, and many other things, some women like to believe that is not fair. Allah created men and women equally, but He gave us different qualities and responsibilities too. Men have many responsibilities that I don't hear women fighting for. For instance, men are required to give their wives a dowry upon marriage. It's rare that you'll meet a woman who is fighting for her right to give her husband a dowry. Men are also responsible for the feeding and clothing of their wives. Most women won't fight for their right to take care of their husbands in that way. The way I see it, as women many of us are not appreciative. We see what men have and we want it for ourselves while completely neglecting all the blessings Allah gave us that he did not give to men.

I think every woman can have an inner feminist in her, but I do not recognize myself as one. I don’t feel that I need to declare myself a feminist because I am simply in a battle with myself to embrace my inner woman-hood and to me that does not need to be labeled as a public movement.
Posted by Riham at 8:26 PM